The Battle Towards The Books Of The Living

In February Pekka Paalanen went to visit his mother. In an instant the stay changed into a trip to the hospital for months.

Movie director Pekka Paalanen, 32, was visiting his mother who suffers from cancer in Porvoo. His head ached, but he thought it would pass by taking aspirin. Suddenly the air felt stuffy and he felt dizzy. As he fell, he realised he could not intercept with his hand, because it didn’t work.

Mother called for an ambulance and so started the trip toward Helsinki’s Meilahti’s hospital. Pekka had had a severe aneurysm with only a 50 pro cent chance of survival.

— Although mother tried to ask what’s the matter, my words didn’t make sense. After the ambulance I don’t remember much else, Pekka remembers.

For about a month Pekka was kept in the acute ward. The almost finished Batman-short movie was left behind.

— From that time I remember mainly nightmares. I slept a lot, but I opened my eyes, smiled and recognised my girlfriend Päivi. I just don’t remember it very well. I think I remember, but my memory has probably mixed with Päivi’s. He tells about feeling like being the third person in the room, a person who observes himself from the outside.

— I saw quite visual dreams. In one of them, I am floating in water, which is all around. I can see lights up above and I know, there awaits life. Down below is dark and cold. I understand, that if I go there, it’ll be the end. Pekk’s closest were told to prepare for bad news.

— The aneurysm injured my speech and paralysed my right side. Apparently one cause was stress and another was high blood pressure. Now I temporarily take medicine, says the man who lost 30 kilos since winter, sitting on a yoga-mat.

Pekka’s brother, Péter Paalanen, 39, stayed as much as possible by his brother’s side. At Meilahti Péter stayed the nights with Pekka. After a month and a half, Pekka was transferred to Laakso hospital (rehab) and the official visiting hours became an obstacle.

— They let me stay even during nights for the first month. We exercised a lot during this time, but then the hospital staff decided to only let me stay during official visiting hours.
The exercises usually requires an assistant. Péter learnt the movements from the therapists.

— There was so much time to exercise, but my brother was not allowed to be present other than during visiting hours and there was so little therapy. I understand normally elderly people get a stroke and they are not able to exercise as much. But I’m young and I should have had more rehab, Pekka ponders.

Also in Péter opinion there was not enough physiotherapy and Pekka was lying in bed or sitting in a wheelchair too much. So Péter decide to investigate and find out about alternatives. Soon he was sending emails around the world and asked for help with the rehabilitation of a young stroke patient.

An Indian woman, Dr. Rajul Vasa quickly answered. She has developed the Vasa-method, that concentrates on improving the collaboration between brain and muscles through different exercises, without medicine or compulsion.

So started the arduous therapy guided from Mumbai, India, that Pekka, together with his brother Péter has been practising daily since the 1st of May. Vasa observes through movie-clips and Skype that the exercises are executed correctly.

The starting point at the hospital was that Pekka could move from his bed to the wheelchair with some assistance. To begin with Vasa ordered the brothers down on the ground, where they then trained. The nurses were wondering.

— Swift improvement started immediately, only after a couple of days. The swelling of my (paretic) foot disappeared. Before I couldn’t even stand properly and I couldn’t bend my leg. Now I can even jump up in the air, Pekka recounts. When Péter and Pekka have been to the “open rehabilitation” the physiotherapists have been in awe.

Pekka got out of the hospital in May and has since lived in his flat in Munkkivuori together with Péter. Now the brothers are leaving for India to (exercise with) Vasa for a longer period of time.

— We’ll exercise in India. There are other patients there from around the world. The intention is to stay in Mumbai until October. After that Pekka will finish his movie that was left just about done. Hopefully it’ll premiere in the beginning of next year. 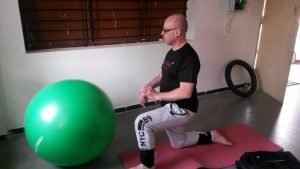